The shape, size and proportion of all parts affect the overall harmony of the human face. A person can have a correct face oval, a neat nose and amazingly beautiful eyes, but the whole picture is able to spoil the forward or chamfered chin. There is a special surgery that deals with the correction of acquired or congenital deficiencies of the chin - mentoplasty. This is not the most difficult plastic surgery, but it’s among the rather rare. It allows you to bring the shape and size of the chin in harmony with the rest of the face. During correction, the chin can be reduced, enlarged or modeled.

How is the surgery to correct the chin performed?

Chin plastic surgery is one of the most painless plastic surgeries with a minimal rehabilitation period. Most often, metoplasty is performed under local anesthesia, less often in combination with intravenous sedation. On average, the duration of the mentoplasty is about 1.5 hours.

The incision for the operation can be performed as an internal one - along the mucosa of the oral cavity at the level of the lower frontal teeth, and the outer one - in the area of the sub-chin skin fold. The procedure of surgery entirely depends on the initial situation, which is must be corrected - increase or decrease the chin protrusion.

Further, after several hours of observation in the hospital, you can go home. After plasty of the chin for 2 weeks, you should avoid eating too coarse and solid food, as well as other loads on the lower jaw. The length of the rehabilitation period before the final result is 2 - 4 weeks. 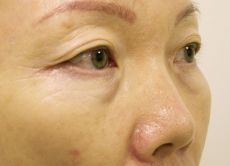 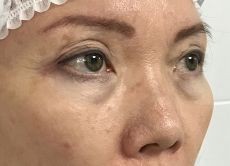 Asian Blepharoplasty. This patient 52 years old . After consultation ,the decision was made to perform an Upper eyelid surgery.We removed excess skin,removed a part of muscles,fat,then was made supratarsel fixation for making her look more beautiful.

I do not know how to write beautifully and lofty)) But I can do it from the heart. With my soul I address to Galyna Viktorovna and thank her with all my heart. She made me breast augmentation. In general, my breast was complicated ... All the negative factors affected the shape and size. Plus, genetics and objective factors)) But1

I removed puffy circles under the eyes. I look vigorous, young)) To a man's plastic was treated badly until he tried it. I thank Galyna for transforming my views and for the results, of course!

I still have plaster on my nose and rehabilitation at full speed. But I already want to say thank to Galyna Viktorovna. She has an easy hand, so I do not feel any inconvenience. All is good. At work, many are aware that I made a nose. And many are already planning to change something in themselves, looking at me.1

I want to thank Galyna Khrushch for the operations, which I managed to do at the age of 60. This is a face lift - I myself do not believe that it's me when I look in the mirror. This abdominoplasty - the removal of fat and skin after losing weight by 30 kg. This brachioplasty is a correction of1

Galyna Viktorovna, I fly in the sky))) Thanks for the nose! Thank you for the breast! Yes, 2 operations - this is not an easy task, but how much positive and changes it brings to life! I wish you great happiness and prosperity! Thank you for the warmth, kindness and sincerity with which you work!

I decided to do blepharoplasty. After the operation, I looked younger: the look became open, the gloomy expression disappeared. The internal state has also improved - and it's wonderful! If I decide again on plastic surgery on my face, I'll do it with Galyna Viktorovna, because now I know for sure that this woman can be trusted!

After childbirth I began to complex in occasion of a stomach or belly. Refused to travel to the sea, she changed her tight-fitting clothes to a shabby one. She pretended that everything was fine. But at one point asked the question: how much can you deceive yourself? And I started looking for a plastic surgeon. Honestly, Galyna Khrushch chose intuitively1

She did rhinoplasty with Galyna. Immediately after the removal of gypsum, the nose seemed large due to swelling, but even then it was already clear that the form became more aesthetic. Now all the tissues have healed and it is clear that the spout turned out cute. The doctor removed the hump and adjusted the lowered tip. As a result,1

Galyna, thank you very very much! My little face is pretty much prettier! Mezo-threads work wonders ... but provided that they are put by Galyna)))) I kiss and embrace! Your Katya

I made the plastic of the upper and lower eyelids at Galyna Khrushch. The surgery was necessary, because creases and bags added age, the look always seemed tired. The result is amazing - I look much younger. The rehabilitation period is short and painless enough. I was determined to endure, but I could not endure, as it turned out, nothing1

I made the plastic of the upper and lower eyelids of Galyna Khrushch. The surgery was necessary, because creases and bags added age, the look always seemed tired. The result is amazing - I look much younger. The rehabilitation period is short and painless enough. I was determined to endure, but I could not endure, as it turned out, nothing1

I increased my breast in Galyna in March this year. I'm very glad that I chose this surgeon. Tactful, accurate, caring woman! Patiently answered all my questions. And also, most importantly, listened attentively and took into account all the wishes. The operation was more than successful. We put anatomical high-profile implants with a volume of 350ml. The result is fully1

In the summer Galyna Khrushch performed two surgeries at the same time – liposuction knees and blepharoplasty. Fat from the knees was removed with the help of RF-lipo, as it still perfectly tightens and rejuvenates the skin in the area where fat is removed. And the eyelids are transconjunctival, since there were hernias under the eyes. Neither on the knees,1

Of all my post-partum troubles, the smallest chest considered the largest. However, on September 12, thanks to Galyna, this problem was solved. Access through the armpits, put anatomical implants. I still wear compression underwear, but I already enjoy the splendor and beauty of my bust. Galyna, you are an incomparable talented doctor. I wish you success in the future!

It's nice when you come to the doctor and you realize that you are in good hands. Probably, I would never have decided on endoscopy of the face, if I had not got to Galyna. Prior to her was 3 surgeons, but the spark did not break out, as they say. I'm 44 years old, but now after the operation1

Many thanks to Galyna for the result of rhinoplasty. The nose is now not just harmonious, but also breathable. The second for me was no less significant than the first. Galyna is a surgeon with an incredibly sensitive heart and an open mind. Honestly, I was worried, because all this plastic surgery did not inspire confidence in me))) But now1

Breast size always suited me, but after birth she sank. About surgery, if it is fair, did not blow out - simply there were no such thoughts. But at one point a close friend decided to make herself a gift - she put implants. I came out of curiosity to the site of her surgeon and found out about the1

Dear Galyna! Thank you very much for my nose and for the calmness and harmony that my life gained after the rhino! I wish you great success, creative achievements, because you are engaged in art, not in craft. Health to you and long life! I thank fate that she sent you to me. Now my nose is my pride, not1

I had a tubular chest - a congenital anomaly. This caused great discomfort. The operation would have done in any case, because in another way you can’t get rid of the problem. Since I was not satisfied with the size, I decided to install implants. The plastic surgeon Galyna Khrushch confirmed that this is possible. I pre-passed the tests, no1

I had problems with the nose - aquiline nose, and on the one hand. Because of this, the face looked, to put it mildly, unattractive. Moreover, I could barely breathe. If she was in the cold for a long time, her nose began to ache. Decided to plastic. I turned to Khrushch and did not regret it. My operation was1

And I just love Galyna Viktorovna and completely trust her!!!!))) Galyna, thank you for you gold hands!!!!

The results are really excellent! I did Silhouette Elevator at Galyna Viktorovna in 2012 year. The result remains to this day. There is no need to resort to anything else. I am sure that in the coming years, the issue of rejuvenation of the face for me is closed. Galyna Viktorovna is an excellent specialist. Huge thanks to her!

From all my heart I want to thank you again! The breast was just gorgeous! I'm glad that I turned to you) You changed my life! To all the staff of the clinic I also express my gratitude. Everything was at the highest level!

Breast augmentation lasted three years. The desire to increase the breast was from the age of 16. Finally, the decision to take the operation took after the failed relationship with MCH. My complexes completely destroyed our sex life. After a heavy parting, I decided to overcome my fear of surgery and do all the same increasing mammoplasty.

When I stopped breastfeeding, I noticed that my chest was a little saggy, and then I decided that I would not be prevented by a breast lift. Then I was not even going to increase anything. When I came to a consultation with Galyna Viktorovna, she suggested that I look at the photos with the results of her operations, and1

Hello, I did blepharoplasty of the upper and lower eyelids, the full scope of the operation was determined by Galyna Viktorovna herself, since I only knew in general terms about blepharoplasty)) Galyna Viktorovna listened to me, told me what she sees and how she can change the appearance of the eyes. She completely trusted her recommendations and decided to make1

I always thought that I should love myself for what I have and turn all my shortcomings into dignities, what would be my own zest. And so she persuaded her friends that she did not yet give birth and did not lose the figure. Here, whatever one may say, if the chest hangs with the ears of a spaniel, it1

In June 2014, Galyna Viktorovna removed strong congenital asymmetry of the breast. Impressions about her work are extremely positive: from the first consultation to the last post-operative dressing! Very attentive, not indifferent to the anxieties and aspirations of the patient, with a good sense of humor and golden hands! At 40, it's hard to decide on changes in your life1

Galyna Viktorovna. Thank you very much!!! Tomorrow, my young face will be 9 months old (on January 14, 2014, I underwent rhinoplasty and upper blepharoplasty). I spent a very long time searching the internet for reviews about plastic surgeons, I was afraid of making a mistake. Intuition did not fail me. I'm very pleased with the result!!!